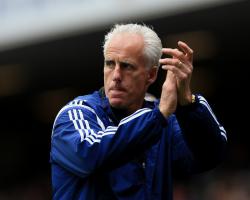 The Canaries - who just missed out on automatic promotion after finishing the regular season in third place - went ahead on 41 minutes through Jonny Howson, after goalkeeper John Ruddy had earlier produced a fine double save and Norwich midfielder Alex Tettey hit the post

However, Ipswich, who battled into the play-offs in sixth place, rallied to level before the break.

Substitute Paul Anderson - introduced in place of striker Alex Varney, who was taken off on a stretcher after suffering a suspected snapped Achilles tendon in an awkward fall - lashed the ball home in stoppage time following a fumble by Ruddy

Neither side were able to find a winner during what was a cagey second half ahead of next Saturday's second leg at Carrow Road, but McCarthy reckons his men should be proud of their efforts against a team which was one of the division's form sides during the run-in

"With two teams competing for a big prize, it will never be wide open, expansive football, but it was very competitive without any nastiness," he said

"It was just players going hammer and tong at each other within the rules of the game.

"I am full of admiration for my side

To go behind when we are actually playing well and to come back shows everything what my team is about.

"For us, I will take that

Now, we have to win at Norwich.

"They have to be slight favourites, because they are a good side, they are at home, but it does not always work out that way.

"It could be a very nervy affair

One goal could be the difference

It could come down to a mistake or a piece of brilliance."

Ipswich, though, must do without Varney, the on-loan Blackburn player facing a lengthy spell of rehabilitation.

"We think he has snapped his Achilles

He is on gas and air at the minute

He is in bits, the poor lad," McCarthy said.

"I haven't got a player for next week and maybe Wembley, but such a big blow for him.

"He has been wonderful, a breath of fresh air and is such a great guy."

Norwich boss Alex Neil accepted his side were not at their very best, but is hopeful for an improved performance back in Norfolk.

"Of course it was going to be cagey

You could see both sets of players were desperate to win the game - you know what is at stake," said the Scot, who has produced an impressive record since his appointment in January.

"We probably had more chances in the first half than Ipswich

However, did we do enough to win the game? Probably not.

"We are in exactly the same position as when we started

The only thing which gives us an advantage, if any, is that we are at home and hopefully we can put a performance in."

While the Norwich squad will now get some downtime, Neil is set to fly up to Scotland on Saturday to attend a coaching course in Glasgow.

He said: "You never get a day off - even when you are in the house, you are on the phone, but that is the job."

Neil is determined to keep his players focused over the course of the week.

"Nothing changes," he said

"It is repetition and making sure the players get the right messages all the time."

McCarthy, however, accepts keeping away from any hype over the next seven days is not going to be so straightforward.

"We will have to put them in the Big Brother house, or maybe in the jungle," he said.

This is even bigger now - one game before Wembley - and you have to deal with it."

He added: "I won't change anything in my plan, because if we start doing something different, players will be unhinged."