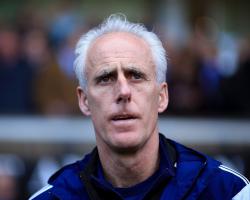 McCarthy has lost Championship play-off ties while in charge of Millwall, Sunderland and Wolves and on Saturday he will embark on another attempt to win promotion via that route when East Anglia rivals Norwich visit Portman Road in the semi-final first leg.

The fairness of the play-offs is often discussed, with the main bone of contention usually being that the team finishing sixth in the table has the same chance of getting promoted as the one which ended the season in third place.

The Canaries also defeated McCarthy's men in both league matches.

McCarthy hopes there will be no complaints from the Norfolk club if Ipswich prevail over the two legs.

''I'm a big fan of the play-off system," said the 56-year-old Yorkshireman.

''My record in them is not great, in fact I was the first to suffer disappointment when they were introduced

But I still think they're brilliant.

''Everybody always wants to reinvent the world

It strikes me that it works perfectly well

If you finish third and you feel a bit peeved that you're playing the team that finished sixth and however many points behind you, well you knew that at the start of the season.

''Finish second or first and then you don't have to whinge about the rules.

I got on with it though

It keeps a good two thirds of the league fighting for something for the majority of the season.''

McCarthy reckons no-one thought Ipswich would be in with a chance of winning promotion this season and he is relishing the cross-border battle with rivals Norwich.

''I could be at home now planning my holidays, knowing I'm going to be miserable wherever I am having not made the play-offs,'' he said.

''So, having made them, I'm delighted

We are relishing the prospect.

''It's a brilliant tie for us to be playing Norwich

The build-up has been fantastic and as soon as we drew them I was immensely excited.

To get to the Premier League we have to play two teams and beat them and it starts with a tough challenge against Norwich.''

McCarthy has not ruled out the possibility of David McGoldrick having some involvement in the tie.

The striker has been out since the beginning of February with a niggling thigh injury but is back in training and has a chance of featuring at some point over the course of the two legs.

On-loan striker Luke Varney comes back into the reckoning after being ineligible against his parent club Blackburn last weekend.

Back-up goalkeeper Dean Gerken has a slight knock but is expected to be fit, although midfielder Luke Hyam is still struggling with a knee problem.