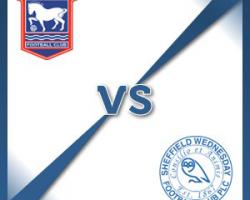 Ipswich V Sheff Wed - view commentary, squad, and statistics of the game live.McCarthy to make changesMick McCarthy has hinted at freshening up his Ipswich side ahead of their home clash with Sheffield Wednesday.The Tractor Boys have won just one of their last five Championship games and one in seven in all competitions and McCarthy admitted after Saturday's defeat to Rotherham that changes could be afoot.That means Freddie Sears could be in line for his full debut while both Nicky and Stephen Hunt will hope to come into their manager's thinking.Midfielder Luke Hyam (knee) and goalkeeper Dean Gerken (hip) remain on the sidelines and miss out once more.Sheffield Wednesday will be without suspended pair Chris Maguire and Glenn Loovens, while midfielder Jose Semedo is an injury doubt.Striker Maguire sits out the first match of a two-game ban after reaching 10 yellow cards for the season and Loovens serves the second of his two-match suspension

Semedo is struggling with an infected toe, which forced him out of Saturday's home draw against Cardiff.Manager Stuart Gray could hand Sergiu Bus his full debut and another new signing, Melo Silva, is hoping to feature after his international clearance came too late last week.Midfielder Lewis Baker, on loan from Chelsea, is pushing for a return to the squad