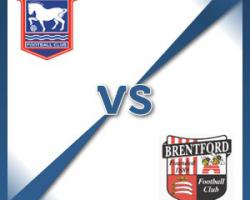 Ipswich V Brentford - view commentary, squad, and statistics of the game live.Strike duo to start for TownStrikers Daryl Murphy and Freddie Sears will be restored to the starting line-up when Ipswich take on Brentford at Portman Road in the Sky Bet Championship.Top scorer Murphy, who missed a late penalty in Wednesday's 2-1 defeat at Leeds, and Sears were dropped to the bench at Elland Road as Town lost for a second successive game.But boss Mick McCarthy has confirmed both will start with Luke Varney and on-loan Chris Wood likely to make way.Teddy Bishop (ankle) could be involved, Noel Hunt (knee) is out for the rest of the season, David McGoldrick (hip) and Luke Hyam (knee) are not ready to return and Darren Ambrose and Stephen Hunt (both hamstring) continue to be assessed.Brentford, one point and one place above Ipswich in sixth, are hoping to add Alan Judge to their squad.The midfielder, who recently returned to fitness after a knee injury, missed Tuesday night's 4-1 win over Huddersfield to have an injection in order to ensure he is ready for the weekend