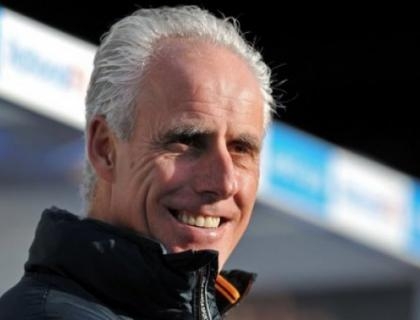 
The striker nodded in from close range in the 89th minute to make it three wins out of three for the Suffolk side after David McGoldrick had earlier equalised a smart opener from Joel Ward.


Huddersfield, who themselves had gone into the match boasting nine points from nine, missed a penalty through James Vaughan with the scores goalless and will feel aggrieved to have come away with nothing.


With both sides in good form and on the cusp of the top six in the Sky Bet Championship, it was an entertaining start with Luke Chambers' cross-shot missing the far post and Ipswich keeper Dean Gerken alert to snuff out Vaughan after Chambers' weak backpass.


Slowly, Huddersfield were showing why they had won their last three matches, with Oliver Norwood shooting just too high and Gerken beating away Danny Ward's powerful drive.


The visitors were given a gilt-edged chance to take the lead from the penalty spot on 25 minutes when Berra clumsily hauled down Vaughan but the 12-goal Terriers' top scorer saw his weak spot-kick comfortably saved by Gerken.


The deadlock was finally broken 10 minutes before the interval when Adam Hammill was allowed to get to the byline and then inside Luke Chambers before his cross was gratefully seized upon by Danny Ward.


And it was almost doubled when Hammill the dangerman cut in from the left before hitting a 25-yard curler which cannoned off the crossbar.


But just five minutes after the restart, Town were level as McGoldrick grabbed his eighth of a productive season. A super ball from Cole Skuse found the striker in space and he gave Smithies no chance with a sharp left-foot shot.


Three minutes later, Ipswich went close to taking the lead when Murphy burst down the left but his powerful low cross evaded Luke Hyam and Nouble.


Town's razor-sharp start to the second half eventually subsided and it was Huddersfield who almost restored their lead on 66 minutes.


Substitute Sean Scannell's shot from the left was deflected by Berra but Gerken did well to turn the ball round his near post before the Ipswich keeper was also equal to Norwood's fierce angled drive.


Just as the game was heading for a draw, following a dismal last 20 minutes, Cresswell's free-kick was headed on by Joel Lynch across his own goal and Murphy headed in the late winner.