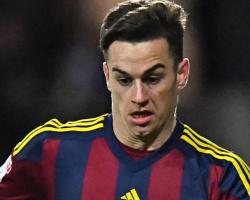 Theo Robinson twice gave the Imps the lead as they threatened to create the biggest shock of the day.

But Lawrence scored two cracking equalisers - the second in the 86th minute - as Lincoln were forced to settle for a replay, which was the very least they deserved following a performance high on energy, passion and guile.

Despite the fact there were 57 places separating the two sides, Lincoln started like a team who had only tasted defeat once in 19 matches.

And after seven minutes, they took a shock lead to send the away fans into ecstasy.

Robinson played the ball out to Nathan Arnold and his devilish low cross was turned in by the onrushing striker from close range.

But within five minutes Ipswich were level after a fantastic run from Lawrence, which started just inside the Lincoln half and ended with him drilling a low shot beyond the legs of Paul Farman.

Ipswich went close just before the break when a powerful run forward by right-back Josh Emmanuel teed up Andre Dozzell and the 17-year-old's shot whistled past the far post, via a deflection off Lincoln skipper Luke Waterfall.

Lincoln almost restored their lead in the 56th minute when a precise through ball from Terry Hawkridge dissected the Town defence but Arnold's route to goal was blocked by the onrushing Gerken.

The visitors were defying the difference in leagues although Freddie Sears almost scored a goal out of nothing when his snap-shot on the turn fizzed just wide.

At the other end, Sam Habergham's dangerous cross-shot was well-held by Gerken before Lincoln regained the lead in the 65th minute.

Away keeper Farman's long clearance was only diverted towards his own goal by the head of Christophe Berra and Robinson expertly volleyed the ball in as Gerken slipped when he came out.

It was no more than the visitors deserved and although Ipswich huffed and puffed they found it difficult to break down their lower league opponents.

Dozzell went close with seven minutes left when his header was parried away by Farman before Ipswich levelled again through Lawrence in the 86th minute.

The Leicester loanee had time to turn 25 yards out and his low shot found the bottom corner beyond the despairing dive of Farman.

There was still time for Lawrence to almost grab his hat-trick after a neat one-two with Sears before Alex Woodyard was set clear in the final minute but his path to goal was blocked brilliantly - and desperately - by a strong challenge by Emmanuel.