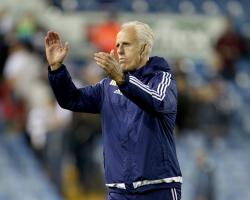 The Tractor Boys head to the north west aiming to pull of a shock result against Louis van Gaal's men, who climbed to second in the table with victory at Southampton on Sunday.

While McCarthy's main focus this season is aiming to secure promotion from the Sky Bet Championship, he believes whatever team he sends out should be able to do themselves justice.

"I am looking forward to Old Trafford

I haven't had too many results there, probably none, and it is still a special place," said the former Sunderland and Wolves boss, who played more than 100 times for United's rivals Manchester City.

Of course, it is almost impossible to try to blank that out.

"We will get taken on the coach right into the ground, you can see the size of it all, the players know the history of the club and all of their players, then when they go out onto the warm-up our lads will see the surroundings.

"It either frightens you or inspires you I guess, so let's hope it inspires our guys."

McCarthy was appointed at Ipswich in November 2012 and guided Town to the play-off semi-finals last season.

He added: "It will be a sharp reminder of what I would like to be doing which is to be managing in the Premier League and for the players, let's hope it is an incentive for them for the rest of the season."

Midfielder Ryan Fraser has recovered from a minor ankle problem, and Kevin Bru is also expected to be available.

Teddy Bishop, though, will not be risked as he continues rehabilitation from a hamstring problem.

McCarthy is expected to rotate his starting XI, with one eye on the upcoming league match against Bristol City.

"We have had lots of games so the last thing I need is everybody playing and then we can't get going on Saturday," he said.

"But no matter which team I play or the team United put out it is going to be a tough match for them.

"We are not just going up there to let them have the ball and keep coming at us, we are going to attack them."