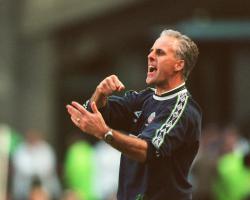 McCarthy brings his Sky Bet Championship promotion hopefuls up to Old Trafford on Wednesday night knowing full well where the priorities of the Suffolk club lie and with no-one giving Town much genuine hope of progress.

However, the 56-year-old former Republic of Ireland manager needs no reminding of just what an inspiration the underdog status can be, having overseen a famous 1-0 victory against Van Gaal's star-studded Holland side in Dublin which secured qualification for the 2002 World Cup play-offs.

"I am not even sure I really remember it, (but yes) that was a great day for me and Ireland, we got in the play-offs and won that against Iran so ended up in the World Cup which was brilliant," said McCarthy, who was in charge of Ireland from February 1996 until November 2002.

McCarthy recalled the tetchy build-up to the match at Lansdowne Road in September 2001, which was eventually settled by a goal from Jason McAteer despite the sending off of full-back Gary Kelly.

"They were all booking the hotels and were all getting ready to be in the play-offs and it was us that was going out, so the whole saga started," he said.

"Unfortunately for Louis one of you (media) will have asked him 'do you think Mick McCarthy's job will be under pressure if they lose?' And he will have said 'well if we win, it probably will because they will be out of the World Cup' so he will have just answered it honestly.

"Then of course I go and get the hump about it, but that is just the way it is.

Now I am a bit more pragmatic and understanding of the way it all works.

"But I was annoyed because of the suggestion we had no chance of beating them and were just going to get turned over by this great Dutch side, but that didn't happen."

McCarthy, though, does not believe the events of some 14 years ago will play any part in Wednesday's showdown with Van Gaal's rejuvenated United side.

"In his career he might not even remember me - I guess people will be asking him now and he might say 'oh yeah' like (it was) an irritation, but I will be shaking hands with him like I do every single manager before and after," McCarthy said.

With Town's sole objective this season securing a long-overdue return to the Premier League, McCarthy remains a realist.

"It would be great if we won at Old Trafford but then if we get beat on Saturday, everyone will be clambering around and we will be back to square one because we have lost points in the league," he said.

"Of course we want to win this game, but it is unlikely we will go on to win the cup.

"I want to beat Bristol City, so let's be under no illusion."

McCarthy is likely to utilise his full squad for the cup tie.

He said: "They all keep saying 'gaffer I want to play at Old Trafford', so I tell them 'get us promoted and play there next year then keep us there so we can all play there on a regular basis'."