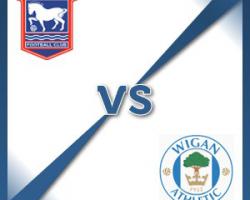 Ipswich V Wigan - view commentary, squad, and statistics of the game live.Murphy missing for IpswichIpswich boss Mick McCarthy will be without top goalscorer Daryl Murphy for the clash with strugglers Wigan.The 31-year-old, who has netted 18 goals this term, is sidelined through injury, but fellow striker David McGoldrick is available again after missing his side's last two matches.Forward Freddie Sears stepped off the bench to score in Town's 3-2 defeat to Brighton last time out, and he could be in line to make his full debut.McCarthy will once again be without Luke Hyam (knee) and Dean Gerken (hip).Wigan boss Malky Mackay could have three new signings at his disposal

Billy McKay complete his move from Inverness in time to be included and a deal to sign Jason Pearce from Leeds was also finalised in time.Chris Herd is expected to be included after he joined on loan from Aston Villa, while Don Cowie made his comeback from injury last week and could start.Ivan Ramis looks set to join Callum McManaman, Roger Espinoza, Ben Watson, Shaun Maloney and Adam Forshaw through the exit door