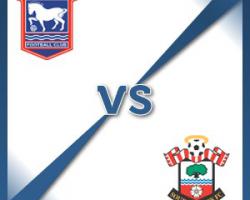 Ipswich V Southampton - view commentary, squad, and statistics of the game live.Ipswich squad hit by illnessIpswich's preparations for their FA Cup replay against Southampton have been disrupted by a virus sweeping through the camp.Midfield trio Cole Skuse, Teddy Bishop and Jay Tabb were all sent home from training and are set to miss the Portman Road showdown."There's a virus going around the place that is laying one or two of them low," said manager Mick McCarthy at his pre-match press conference

It's made me realise that I'm not as soft as I thought I was when younger, fitter people have been affected."Of course, I'm not really that happy that they are laid up because they can't play

It's very unlikely that they'll be involved, but I think the other 14 are okay."McCarthy will pick his side with one eye on the Sky Bet Championship promotion race - Town currently lie third, a point behind leaders Bournemouth."If you saw the team that we played at Southampton it will be similar to that," added McCarthy

"We made five or six changes and we competed very well."I am operating with probably 17 or 18 fit players

We've got Saturday, Wednesday, Saturday, we have some big games coming up, so it's probably right that I change my players around."Meanwhile, Southampton have been hit by the news that defender Toby Alderweireld will miss up to four weeks with a hamstring strain.The 25-year-old has been one of Saints' star performers since arriving on a season-long loan from Atletico Madrid, seamlessly replacing Dejan Lovren after he joined Liverpool.Alderweireld has helped Southampton keep the tightest defence in the Barclays Premier League, with Sunday's 1-0 win at Manchester United a 10th clean sheet of the campaign.The Belgium international was replaced by Florin Gardos just 21 minutes into that Old Trafford encounter with a hamstring complaint that could rule him out for three to four weeks.Alderweireld's injury is not as serious as first feared but leaves Southampton light in central defence, given Maya Yoshida is currently away with Japan at the Asian Cup.Saints captain Jose Fonte and Gardos are the only senior centre-backs at Ronald Koeman's disposal, meaning the Dutchman may look to make a move this month."I don't know (if we need to sign another centre half), we have to speak about that," said Koeman, who can also call upon the inexperienced Jason McCarthy."We know that Maya will be away for some weeks, we know that."We knew already if we get some injuries then maybe it can be a problem but I think in our squad we can do some changes in positions to keep going."Midfielder Jack Cork, who has been out of first-team action for nine matches due to an ankle injury, could make his return after featuring for the Under-21s on Monday