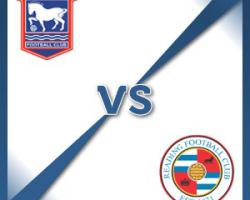 Ipswich V Reading - view commentary, squad, and statistics of the game live.Varney set for Ipswich debutLuke Varney is expected to go straight into the Ipswich squad after signing on loan from Blackburn.The striker has joined for an initial month but it could be extended until the end of the season, including the Sky Bet Championship play-offs.He covers the injured Noel Hunt who could miss the rest of the season after suffering a knee injury in the win at Fulham

Ipswich will also hope to have David McGoldrick available after he missed the 2-1 victory at Craven Cottage with a thigh injury.Reading can welcome back defender Michael Hector, who has shaken off the knock which kept him out of the 1-0 midweek home defeat by Wigan.Hector's return will see Nathanial Chalobah, who was pressed into emergency action as a centre-half, revert to his usual midfield position.The Royals are still without defenders Chris Gunter and Anton Ferdinand and midfielder Jem Karacan.Gunter remains sidelined by an ankle knock, Ferdinand has been dogged by a calf problem all season and Karacan is still feeling his way back from a long-term knee injury