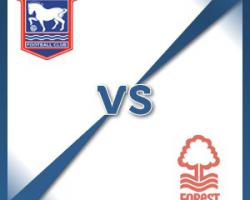 Ipswich V Nottm Forest - view commentary, squad, and statistics of the game live.Enforced change for TownIpswich will be forced to make at least one change to their squad for the visit of Nottingham Forest to Portman Road in the Sky Bet Championship.Crystal Palace midfielder Jonny Williams this week had his loan cut short following a recurrence of a groin injury which sidelined him earlier in the season.Williams, forced off in the Under-21s' game against Bristol City on Monday, made just two substitute appearances in his third loan stint with Town.Striker Luke Varney (hamstring) will continue to be assessed while David McGoldrick (thigh), Luke Hyam (knee), Darren Ambrose (hamstring) and Kevin Bru (calf) are still not fit.Jorge Grant will be in the Nottingham Forest squad that travels to Suffolk.Fresh from helping the Reds' Under-21 team win their league this week, the midfielder has been invited back into the first-team set up by manager Dougie Freedman

Grant last played for the first team in September.Freedman has plenty of options available should he wish to make any changes to his starting line-up, with Michael Mancienne, Jamie Paterson, Chris Burke, Chuba Akpom, Tyler Walker and Ben Osborn all pushing for places.Defender Kelvin Wilson will serve the second game of a four-match suspension while Chris Cohen, Andy Reid, Britt Assombalonga and Matty Fryatt remain out injured