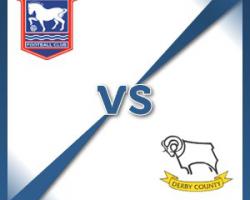 Ipswich V Derby - view commentary, squad, and statistics of the game live.Sammon sits it outIpswich will be without on-loan Derby striker Conor Sammon against his parent club under the terms of his deal.But Noel Hunt is expected to be in the squad for the crunch Sky Bet Championship clash after he joined on a free transfer from Leeds on Thursday.The 32-year-old Irishman scored one goal in four games during a recent loan spell at Portman Road.Boss Mick McCarthy made six changes to his starting XI for the FA Cup tie at Southampton last Sunday but it remains to be seen whether Dean Gerken, Tyrone Mings, Kevin Bru, Darren Ambrose, Luke Hyam and Stephen Hunt retain their places.Darren Bent is in line to make his debut for Derby against his boyhood club.Aston Villa striker Bent, who last week joined the Rams on loan for the remainder of the season, began his career at Ipswich and on Saturday will make his first return to Portman Road as an opposition player since leaving nine-and-a-half years ago

Bent's arrival signalled the end of Leon Best's loan spell and he returned to Blackburn this week.Derby have no new problems but head coach Steve McClaren is expected to make several changes from the side that narrowly defeated non-league Southport in the FA Cup, with the likes of Lee Grant, Craig Forsyth, Johnny Russell and Chris Martin expected to return to the starting line-up