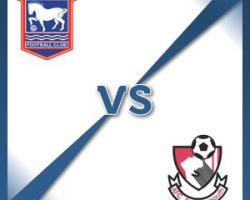 However, Jonny Parr is struggling with a hamstring injury and Kevin Bru suffered a sore calf in Ipswich's 1-0 win at Watford last time out

Both will be assessed ahead of the game, with sixth-placed Town looking to close down the Championship leaders.Bournemouth could hand Kenwyne Jones a debut following his arrival from Cardiff.The 30-year-old former Sunderland striker has made the loan move to the south coast until the end of the season and he could come straight into the starting line-up with Callum Wilson a major doubt.Wilson, who has scored 19 times this season, suffered an injury against Middlesbrough and has not trained since so looks very unlikely to return to action against the Tractor Boys.Matt Ritchie made his international debut for Scotland during the break and is set to start against Ipswich having returned unscathed