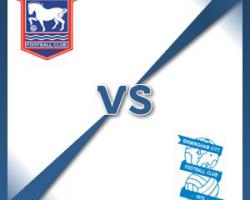 Ipswich V Birmingham - view commentary, squad, and statistics of the game live.Key players still out for TownIpswich remain without a number of key players as they look to get back to winning ways against Birmingham.Darren Ambrose (hamstring), Stephen Hunt (hamstring), Noel Hunt (knee) and Luke Hyam (knee) all miss out once again along with striker David McGoldrick who continues to struggle with a hip problem.Luke Varney and Richard Chaplow will both hope to make their full debuts for the Tractor Boys

The pair started on the bench in Saturday's defeat to Reading having signed loan deals late last week but could now be in line to start.That home defeat to the Royals means Ipswich have now won just three of their last 10 games in all competitions.Birmingham will be without Koby Arthur when they travel to Portman Road but will give David Davis a chance to prove his fitness

Michael Morrison (ankle), Gavin Gunning and Matt Green (both knee) are still out