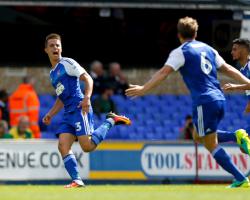 Norwich missed out on the chance to go top of the Sky Bet Championship after Cameron Jerome's 26th-minute opener.

Left-back Knudsen scored only his second goal of his Ipswich career on the stroke of half-time before Steven Whittaker had a shot cleared off the line for the visitors and Teddy Bishop went close for Town in the dying stages.

Ipswich started on the front foot and were almost ahead after two minutes, and possibly should have been, when Jonathan Douglas had the ball in the net but it was ruled out for offside.

Minutes later, Daryl Murphy should have grabbed the game's first goal but dragged his shot wide of the far post after Knudsen's ball over the top.

Grant Ward's cross was directed goalwards by Murphy and Norwich goalkeeper Michael McGovern was relieved to see the header go just over the crossbar.

McGovern was then equal to Murphy after the striker met Luke Chambers' cross with his head halfway through the first half.

Against the run of play, Norwich took the lead as Ivo Pinto outmuscled Freddie Sears down the right and his low cross saw Wes Hoolahan and Jonathan Howson combine for Jerome to calmly stroke the ball home off the inside of the post.

Steven Naismith almost found the top corner with a sharp first-time effort after more good work from Pinto in the 37th minute before Ipswich grabbed an equaliser in first-half stoppage time.

Murphy and Sears combined to lay the ball to Knudsen who cut back and hit a perfect low shot with his weaker right foot which gave McGovern no chance.

The second half started a little less frantic before Howson cleared Christophe Berra's header at Norwich's near post and Adam Webster stopped a certain goal, heading Whittaker's miss-hit shot off his line.

Although the game was less open than the first half, only the width of the post stopped Norwich from regaining the lead in the 74th minute.

Jerome did brilliantly on the right wing to work an opening and his cross was poorly cleared by Webster straight to Whittaker, the right-back just failing to score when his low shot cannoned off the woodwork.

With two minutes remaining, Whittaker almost became the villain after he dallied on the ball in his own area

Substitute Bishop dispossessed him but his shot was brilliantly blocked by the onrushing McGovern.

Hoolahan and Jacob Murphy both had chances to write themselves into East Anglian folklore in injury time but it ended honours even.